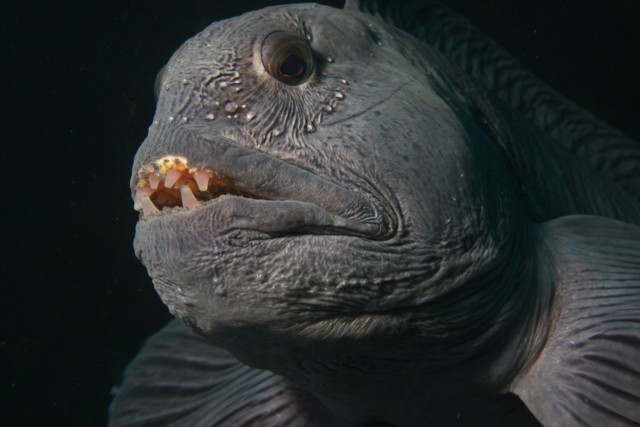 Anyone that has been diving with us to the Arnarnes chimneys know that there is a wolffish, or two, lurking in almost every crevice and hole around it. We’ve actually made quite a few fish friends on the way. Probably someone, even non-divers, have heard about our friends the cods and Stefanie, Stefanie Jr. and Stefanie the first, as you can see we work hard finding names for the wolffish.

Since we dive down to the Arnarnes chimneys almost every day it gives us the perfect opportunity to keep a close eye on the wolffish and research its behavior. It might sounds weird to mention it but the divers that go down there almost everyday are starting to recognize the fishes by their faces and behavior, non ever said that divers were completely sane either. But because of all that time spent under the surface it has given us a great deal of information about these amazing creatures and allowed us to form some theories. 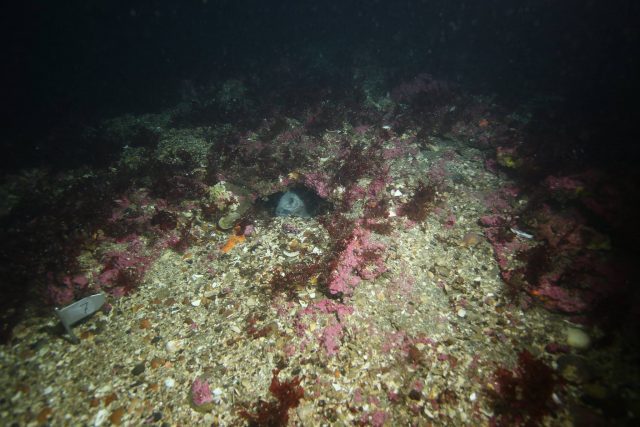 Marking with a thermometer and a wolffish in its hole

It all started a few years ago, when Erlendur Bogason, decided to start training the wolffish and try to lure it out of it’s hole. He fed it clams and after some time he had managed to get the wolffish to come towards him in every single dive and somehow it knows who he is and approaches him first, even if there are other divers around. That was Stefanie the first or sometimes we call her Stone-Age Stefanie since she looks like, well, something from the stone ages. However Stefanie the first disappeared for few years and didn’t come back until the summer of 2016. In the mean time Erlendur trained the famous Stefanie.

The name didn’t come until 2011 when National Geography along with Bob Ballard came to film the hydro-thermal chimneys, he asked what the wolffish name was and of course Erlendur answered that the name was Bob straight away, but after some time of thinking he decided to name it after Bob’s assistant, Stefanie.

Often nature has multiple ways of making people astonished and it managed to do it once again. One day during a dive there wasn’t only one wolffish in Stefanie’s hole but two, and the second one behaved like Stefanie and swam to the divers without any training and therefor got the name Stefanie Jr. There is a difference between those wolffishes though, Stefanie is a lot bigger and cuddly… It’s weird to write that the wolffish Stefanie is cuddly but it’s true. She often comes to divers and goes belly up to get scratched on the belly, even though there is no food she still comes to be petted. We have quite a few shots of her going on divers shoulders to rest and be petted. Stefanie Jr. however does not have that cuddly attitude and demands food and is a little bit more aggressive, when she doesn’t get what she wants she’ll show it.

During the autumn of 2015 we noticed behavioral changes in the wolffish. Instead of coming to us it stayed in it’s holes and instead we went to them. In mid November we noticed it had eggs that were not there before. Erlendur saw the perfect opportunity in filming his friends and so he did but unfortunately we did not managed to fallow the spawning through and the eggs and the wolfish had disappeared.

In 2016 we noticed the same behavior but when it came to the spawning we knew the exact date, it was the 9th of September. Erlendur decided to keep closer track on the spawning and decided to start a little research for himself. He took Arnarnesstrytan and The Wolffish Garden of King Hárek, for short the Wolffish Garden, to compare how the wolffish behaved and which ones had spawned. When Erlendur saw that only around 20% of the wolffish had eggs he decided to promote his idea of researching the wolffish and called a few companies and asked which ones would like to work with him on this project. From most of those companies he got a positive answer so the research could fully start his project.

With the help of his team and friends, Marco Vindas, Sævör Dagný, Þorbjörn hf., Síldarvinnslan hf., HB Grandi hf, Samherji Ísland ehf., Stakkavík ehf., Stjörnu-Oddi and so many more that we would like to thank for all their help and hopefully their help and more in the future, the project officially started.

We started by drawing down the Arnarnes chimney area and the Woflfish Garden and marked 15 holes in the Arnarnes are and 25 in the Wolffish Garden. Stjörnu-Oddi gave two thermometers to the project and we placed one in each place.

It’s a known fact that the stock of the wolffish is decreasing quite fast and where divers could see a lot of wolffish before there is non anymore. In 2004 it was listed as a species of concern. Therefor it’s very important to learn more about this fascinating species and try to understand why the stock is dropping so dramatically.