Can the Ocean Quahog Teach us About the Mechanisms of Climate Change?

In agust 2012 Erlendur collaborated with Soraya Marali, from Bernd Schöne’s group from the University of Mainz, Germany on collecting the shell Arctica islandica. The research team uses bivalve shells for climate reconstructions.The research team is interested in old live shells and shells that died during the last 1000 years. According to Soraya the ocean quahog called Arctica islandica is an extremely long-lived bivalve species. Some specimens can get as old as 374 years or 507 years.

The ocean quahog builds its shell by successively adding growth layers of calcium carbonate, whereby each layer represents one year of growth. The ontogenetic age of each shell can therefore be determined precisely by counting the number of growth layers. Most importantly, the shells record information about environmental factors, like seawater temperatures, during their growth, and thus, document the climate variability over several decades or even centuries. This information can be read by measuring the widths of the growth layers and by analyzing the geochemical composition of the shell. The Icelandic shells are currently under investigation. The results of this study will further improve our understanding about the
mechanisms of climate change over the last millennium.

Research performed by Gudrun G. Thorarinsdóttir showed that there are 21 shells (2.8 kg) per square meters which means there are over 200.000 tons of Arctica islandica shells at shallow depth of the coast of north Iceland. There are speculations that it could be possible to find shells that are even older than 507 years in the same area.

Erlendur has also been involved in research on fishing and behavior of the shell, specifically examining how long and how deep the shell inhabits the sand. Currently there is no commercial fishing of the shell in Iceland. The flesh of the Artica islandica shell is a favored food by both the Codfish and the Wolffish. However the fish are unable to retrieve the fish out of the sand bed and break the shell with their teeth. Erlendur collects and breaks the shells to feet to the fish while diving, giving him the opportunity to connect and even form bonds with some of the fish. 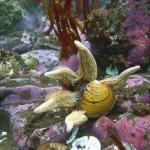 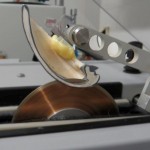 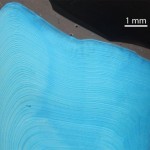 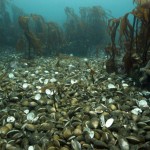 Shells after a big storm.