The ship Standard, the wreck

In the spring of 1997 Erlendur did some diving favours to a local fisherman in Akureyri. When he wanted to turn back the favours, Erlendur asked if he could instead take him on his boat just outside the harbour and look for a wreck Erlendur had heard about some years ago.
They didn’t know anything about this wreck or if it even existed, but decided to use the depth sounder on the boat and look for it. This was probably one of the fastest search for a wreck ever, they turned on the depth sounder and less than 5 min later they found something huge at the bottom of the sea.

Erlendur dove down to something he didn’t know what was and at the depth of 15 meters he came to the port side of a wreck that was lying on the starboard side at bottom depth of 26 meters. He later measured the size of the wreck and found out it was over 60 meters long and 11 meters wide. He finally found a German book with the story of this ship.

The name of the ship is Standard and it was built in the USA in 1874 and was later owned by a German fishing company that was fishing in Iceland. When World War I started, all German vessels were ordered to come home to Germany but the German fishing fleet left the Standard behind, laying with an anchor in the harbor of Akureyri. After lying with an anchor for long time, one day in 1917 the Standard had disappeared. Now the Standard has been at the bottom of the harbor for almost 100 years and it’s still in good condition; you can go inside the wreck. You also have to see the art on the bow where the wood has been cut. There is usually a lot of fish life around and in the wreck.

You can include a dive to the wreck Standard on your Custom dive tour but please note that we don’t dive when there are cruise vessels in the port of Akureyri. 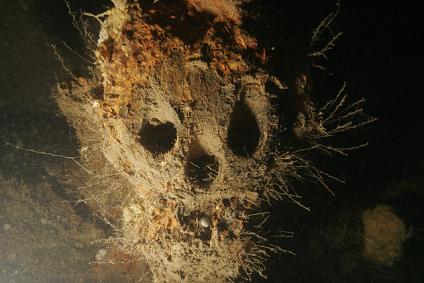