Grímsey is a small beautiful island crossed by the arctic circle where few fishermen, their families and millions of sea birds lives. It is the northernmost island off the coast of Iceland, 41 km from the mainland. It has 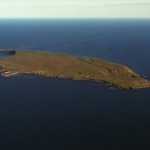 an area of 5,3 km2 and reaches a height of 105 m. It is composed of basalt, except for some sandstone in the northwestern part. All but the southern shoreline consists of steep cliffs, with basalt in many parts. There is a rich vegetation cover of marshland, grass and moss.

Although it lies on the Arctic Circle, the island enjoys a mild climate, and supports enormously large bird colonies. About 155 people live in Grímsey, the main occupations are fishing and fish processing, with agriculture and collecting seabirds’ eggs as sidelines.

Grímsey is a separate local government area, and there was a resident vicar until the middle of this century. The church, which was built from driftwood in 1867 and renovated in 1956, is now under the parish of Akureyri. There is also a community center and school on the island, and co-operative shop. Regular air and ferry services link Grímsey to Akureyri.

According to folk tradition, the island is named after Vestfjarda-Grimur Sigurdsson. Heimskringla (old sagas) states how King Ólafur of Norway asked for the island as a gift, but the Icelanders rejected the idea, since the king would’ve had an army stationed there. In the late 18th century it seemed that the community’s fate was to die out, since most of the men expired by pneumonia or accidents at sea. However, the community has endured to this day, even though the population has lessened a little.

In the late 19th century the people of Grímsey were known for their prowess in chess. An American, Willard Fiske, presented them with chess sets, a library and a sum of money to persue this.

The island is a popular tourist destination, and certificates are issued there for crossing the Arctic Circle.

Our Grímsey tour can be offered both for divers and snorkelers. When diving around Grímsey you can dive under the arctic circle with Puffins and the Guillemot birds. In the blue and clear cold arctic sea around Grímsey where you dive the bottom is covered with celp forests and there you can see Cod, Plaice and big steams of Pollock. Both big and small whales are usually not far away. We will go with the ferry from the harbour in Akureyri late Friday and come back to Akureyri late Saturday. We do 2 dives around Grímsey and after the dives we walk around the island. By special request we can plan a Grímsey tour for you on other days as well.